Large areas of Puketi Forest have never been logged. Many of the trees are centuries old. These old forest giants are home to dozens of epiphytes. Epiphytes are plants that grow on another plant but don’t take any nourishment from it (unlike parasitic plants). The epiphyte benefits by being closer to, or above, the canopy and hence receives more light for increased photosynthesis. In some cases the host tree also benefits as some epiphytes accumulate large amounts of organic matter (up to half a metre in depth) and some trees grow roots from their trunk and branches to extract nourishment from the humus in their crowns.

The perching lily (scientific name, Collospermum hastatum) is one of the largest and most magnificent of the epiphytes. It is well adapted to life in the tree tops. Its long, erect, somewhat fleshy V-shaped leaves are arranged in fans to channel water to the base, where it’s held until needed during dry spells. One of New Zealand’s species of mosquitoes breeds exclusively in this small reservoir of water.

Other species such as the epiphytic Pittosporums (P.cornifolium and P.kirkii) and a number of ferns and fern allies (for example, Sickle Spleenwart, Asplenium polyodon and hanging club moss, Huperzia varia) also take advantage of the humus.

Kauri trees belong to the Araucariaceae family of gymnosperms, which are cone bearing trees. This is an ancient family with representatives only in the southern hemisphere. There are 20 species of Agathis trees found around the Pacific. Kauri is the only New Zealand species in this family. They are one of the largest trees found anywhere in the world. The largest kauri on record grew at Mercury Bay, it was measured in 1850 and was 21.8 m high, apparently to the first branch, and had a girth of 23.43 m. Puketi Forest is home to the fourth largest living kauri, named Te Tangi o te Tui, which grows beside the Takapau Track (now closed, for protection of the kauri trees against kauri dieback).

The crowns of kauri spread out and the lower branches can be up to 2 metres in diameter. The massive trunks of kauri are kept clean and free of epiphytes because they shed their branches as they grow older and continuously shed small and large flakes of bark, which build up in a mound under the tree and rot to form a rich humus. Because the trunk is so huge and free of branches more timber can be cut from a kauri tree than from any other tree of a comparable size. The feeding roots are very shallow and boardwalks protect these roots from the compaction and trampling by human visitors to Manginangina Scenic Reserve within Puketi Forest. 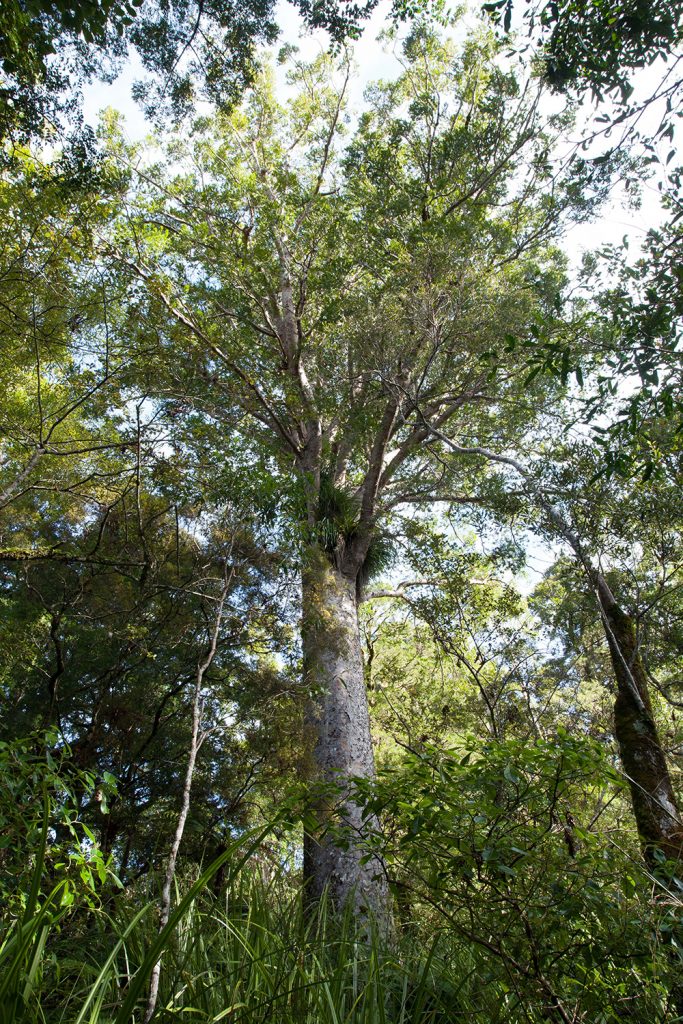 Kauri timber is light and very durable and similar in colour to macrocarpa (a dense yellow). It is very straight grained and free from knots so was used for ship masts and spars, boat building, railway carriages, houses and joinery and furniture making. Some of the greatest Northern waka taua (war canoes) were made of a single massive trunk hollowed out by fire and tools made from stone. The trees also exude sap from any wound and this sap hardens into gum. Kauri gum was highly valued by the Maori, as it was used for varnishes and jewellery and also chewed to help ease toothache. Burning kauri gum was used for heating and light and a powder from the soot was used for tattooing.