The fantail or Piwakawaka is a small native forest bird with a small head and bill and a long tail which opens to a fan, giving the bird its name. It has a grey head, white eyebrow and white and black band under the chin on the upper chest. Its tail is black and white. The scientific name for fantail is Rhipidura fuliginosa.

This well-named bird has been able to adapt itself very satisfactorily to an environment that has changed over the centuries. Originally a bird of open native forests and scrub, it is now also to be found in the forests of introduced pines, in orchards, and in and around the botanic gardens of New Zealand’s largest cities. Its geographical range is very wide within New Zealand, though it does not occur on our sub-Antarctic islands, nor on the Kermadecs. 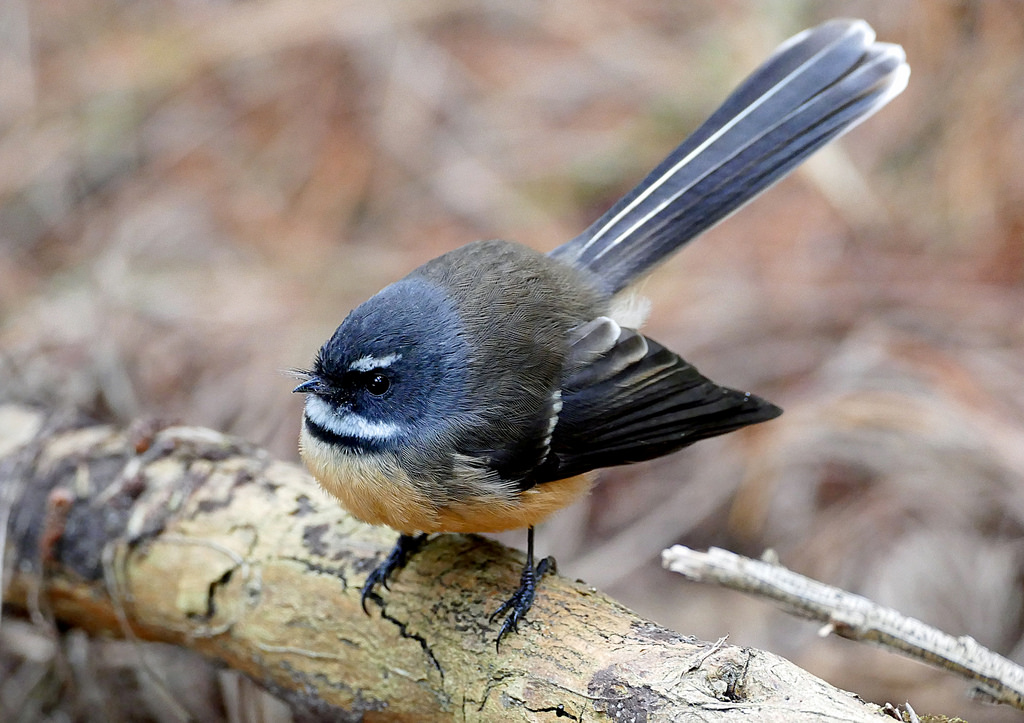 Fantails feed on invertebrates and typically do so while flying. Using their fanned tail they are easily manoeuverable which helps them quickly change direction while they are catching flies. They are known to hop around upside down in amongst tree ferns and foliage looking to pick insects from the underside of leaves. They feed on a diet of moths, flies, spiders, wasps, and beetles, and rarely feed on the ground.

Sexes are alike, though males are slightly larger than females. Juvenile males can start breeding between 2-9 months old and as many as 5 clutches can be laid in one season, with between 2-5 eggs per clutch. The fantails stay in pairs all year but high mortality means they seldom survive more than a season. Both adults incubate for about 14 days and the chicks fledge at about 13 days. Both adults will feed the young but as soon as the female starts building the next nest the male takes over the role of feeding the previous brood.

The breeding season extends mainly from September to January, and a cone-shaped nest of moss, hair, and grass bound with cobwebs is frequently sited in vegetation near or actually overhanging water.

The common call is a sharp and repeated chirp, the song a series of high-pitched twitterings.

Click here to hear the song of the piwakawaka