There is one freshwater crab in New Zealand, the Halicarcinus lacustris. This crab should not be confused with the mud crabs (particularly Helice crassa) that are also found in river estuaries.

These crabs have wide, flat bodies and no obvious tail. The head and chest are fused and protected by a shield-like structure called a carapace. The tail is tucked under its body. Males have a narrow tail; females have a broad, rounded one to supports their eggs. Freshwater crabs, unlike hermit crabs and king crabs, have a pair of claws and four pairs of walking legs. Freshwater crabs have small pincers, not very effective as protection against predators like eels and other fish, causing them to spend daylight hours in crevices in fallen logs and under rocks. 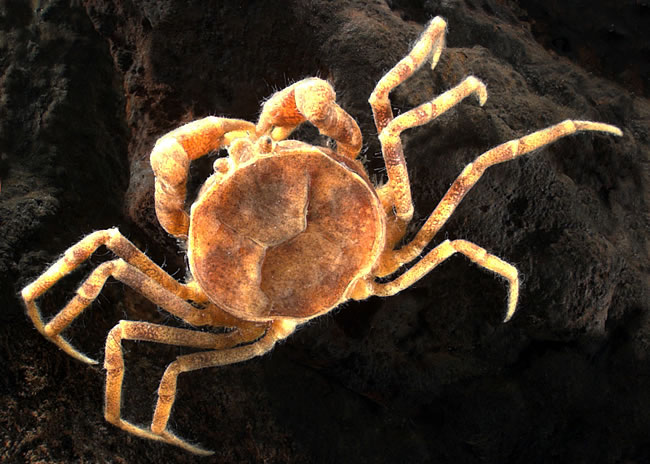 Freshwater crabs take shelter in woody debris in streams, which also provide an important habitat for other stream invertebrates and fish. Trees not only provide this woody debris, but they also create the shade that cools stream water, allowing the many temperature-sensitive invertebrates to survive.

Unlike marine crabs, young freshwater crabs hatch directly from the eggs carried under the folded tail of their mothers as with freshwater crayfish. They aredetritivores, feeding on both animal and vegetable material found in their habitat’s organic silt. They grow to around 10 mm in shell width.

Freshwater crabs are considered to be a threatened species.

Did you know? Freshwater crabs need to live in the shade in order to see because their wide, stalked eyes are too sensitive to deal with bright light.