Freshwater crayfish (Maori name, Koura) are the largest of all New Zealand freshwater invertebrates. They are also known as koura, crawlies or Paranephrops (their scientific name). They can grow to a good edible size and are often farmed in New Zealand.

Crayfish are omnivores, feeding at night on both plant and animal matter. During the day they hide amongst stones, under woody debris, amongst weeds or in their own burrows in soft sediments.

Crayfish have features that help them explore and respond to their surrounding habitat. A pair of long antennae project from their heads and can be rotated in all directions to touch and explore their rocky habitat. 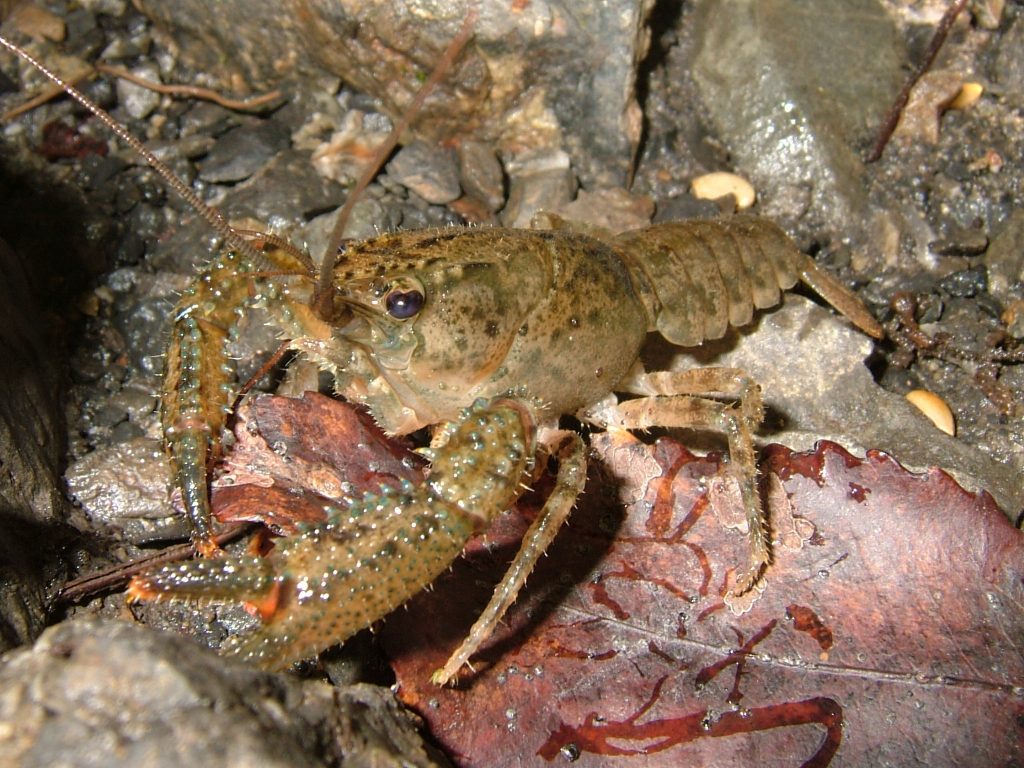 These also serve as defensive lances, as they have serrated edges and can be used to poke or frighten off predators. Large koura can give you a powerful nip with their pincers! Between the antennae is a pair of short, jointed feelers that function as sniffers. Crayfish can detect the slightest of movements when under water, but bright sunlight may damage their eyes when they are pulled from the water.

Koura has a hard shell skin so it is a crustacean, one of the large group of animals, the arthropods, because their legs and bodies are protected by a jointed hard but flexible body covering. This covering eventually gets too small for the growing animal and as a result, it splits and is left behind, while the new skin underneath hardens. This is known as “moulting”.

Crayfish reach maturity around 7 years of age. Mating occurs in late summer and autumn. The female crayfish gathers eggs fertilised by the male and attaches them to long hairs under her tail, where they remain for three to five months before hatching. Small koura hatch about 3 to 4 months later, looking like miniature versions of their parents. They hang from their mothers by their pincers until they are 4mm long. By their fourth year they have become adults and are 20mm long.

Did you know? Koura use their four pairs of walking legs to move around. They can also move in “reverse” by flicking their tails forward violently when alarmed, to move back into shelter.