Freshwater mussels (kakahi or Hyridella menziesi) are found in the mud of lakes, rivers and streams. The term mussel is used for several families of bivalve mollusks inhabiting lakes, rivers, and creeks.

The freshwater mussels and saltwater mussels (family Mytilidae) are not closely related and are grouped in different subclasses despite some similarities in appearance.

All freshwater mussels belong to the mollusk order Unionoida, a solely freshwater group. Their shells are typically covered by a thick skin or periostracum that is variously colored. 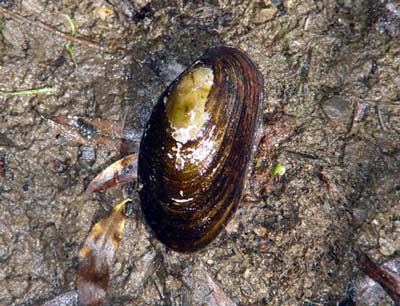 Internally, the shell has a pearly appearance. These features have made freshwater mussels popular among collectors since the early 19th century. The mussel’s external shell is composed of two halves that protect it from predators.

Both marine and freshwater mussels are filter feeders that feed on plankton and other microscopic creatures. They do so by drawing water in by the actions of the cilia located on the gills for feeding.

Species of freshwater mussels produce a larva called a glochidium that is parasitic on fish or amphibians. The larvae are “raised” in the parent’s inner and/or outer gills for a varying period of time depending upon the species, where they are constantly flushed with oxygen-rich water. For a time, these glochidia are parasitic on fish, attaching themselves to the fish’s fins or gills. They grow and then break free from the host and drop to the bottom of the water. If they land in a place that suits their needs, they will continue their development and begin their independent life.

Typically, the mussel’s only movements are vertical adjustments of the animal’s position in response to changing environmental conditions. Migrations occur, but are usually of short duration and distance and are usually made to withdraw from unsuitable habitats.

Did you know? Mussels have a large organ referred to as a foot, which is tongue-like in shape with a groove.