The earth is inhabited by 9,000 species of birds. Of these, kiwis are among the most unusual, from the egg through to adulthood.

The North Island Brown Kiwi (Apteryx Australis Mantelli) is found in Puketi Forest. Kiwis belong to the family Apterygidae, which is only found in New Zealand. They are an ancient family and are related to the flightless ratites such as ostrich, emu and the extinct moa. Their ancestors are believed to have been in New Zealand and flightless 70 million years ago when it split from the southern landmass (Gondwana).

Kiwis hold a special place in the heart of most New Zealanders. They are unique, ancient and only found here. They are also declining in number so fast that they are likely to become extinct in our lifetime. 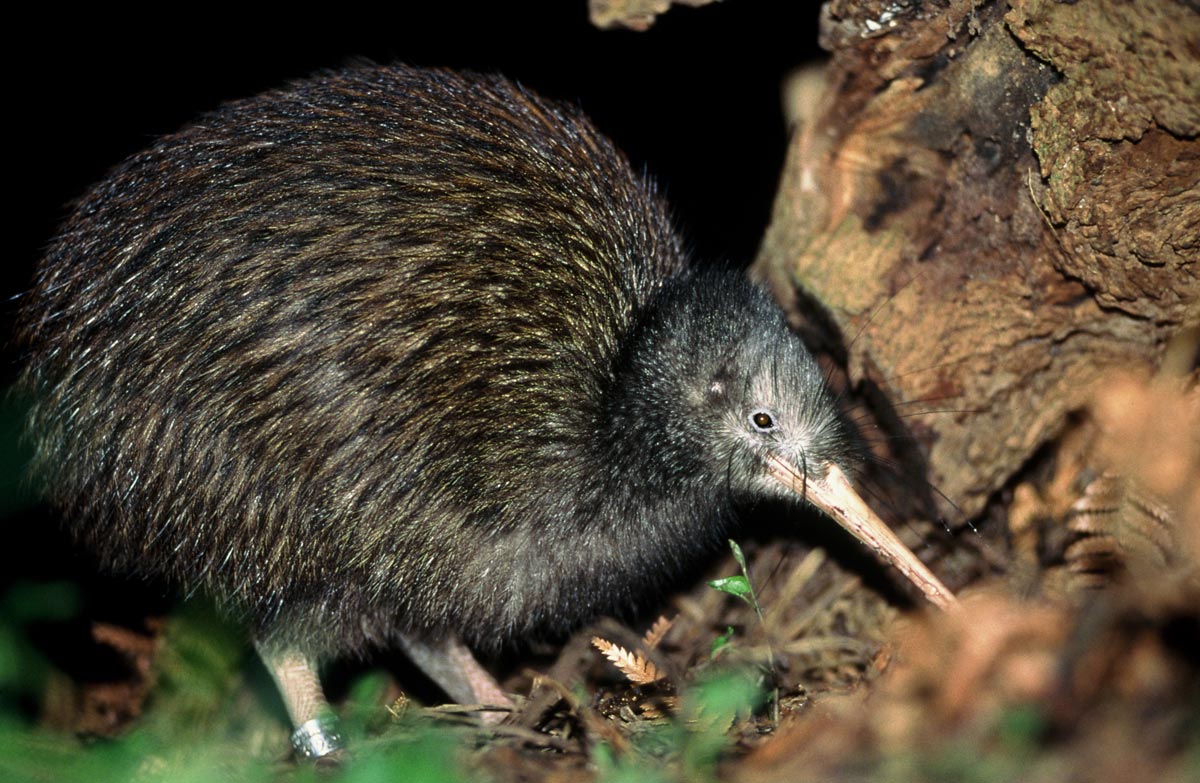 According to many Maori traditions the kiwi is the eldest child of Tane Mahuta, god of the forest, who was responsible for separating Rangi (the sky father) and Papatuanuku (the earth mother) and allowing life on earth to exist and spread. According to this relationship kiwi are the elder brothers of humans and offer us protection. New Zealand people are known as “kiwis” as are a range of New Zealand products, from bacon to shoe polish. The Puketi Forest Trust will do all we can to ensure that these symbols of life in Aotearoa/New Zealand remain in the wild for generations to experience and enjoy.

Kiwis eat mostly invertebrates and fruits and have a well developed sense of smell compared to other birds. Their long bill is surrounded by long tactile facial bristles. Largely nocturnal, the kiwi burrows in the ground, is the only bird known to have nostrils at the end of its bill and literally sniffs out food.

Females are larger and heavier than males and lay large eggs which make up 15-20% of their body weight! The eggs are laid in burrows and are incubated by the males for 65-85 days. Females can lay more than one egg.the egg averages 15per cent of the female’s body weight (compared to two percent for the ostrich).

Females are larger than males and with brown kiwi, the male does most of the egg incubating. Kiwis live in pairs and mate for life, sometimes as long as 30 years. The chicks hatch fully feathered and leave the nest after approximately one week. From this point on they are independent.

Kiwis are usually nocturnal. Kiwis continue to decline in number throughout New Zealand at approximately 5% per year.

Although they are often found in scrubland and rough pasture and can adapt to a variety of habitat, young kiwi are often killed by stoats and feral cats. Possums eat their eggs and disrupt nesting. Forest clearance, human disturbance, and poorly controlled dogs have also contributed to kiwi decline. Predator control such as that completed by the Puketi Forest Trust will help kiwi survive in the future.

Although few New Zealanders are lucky enough to see kiwis in the wild, many have heard their haunting calls. Brown kiwis make a variety of sounds, including grunts, growls, mews, purrs, squeals, clacks, chortles and whistles.

Did you know? The birds supposedly derive their name from the male’s very loud, prolonged, shrill ascending then descending whistle call-but this is better represented by ah-eel than ki-wi. The first Maoris in New Zealand likely named the kiwi after a species found in their ancestral homeland-the kiwi, or bristle-thighed curlew-which also has a slightly down-curved bill.