Peripatus is the general common name for members of a group of arthropods which exhibit some characteristics of the true worms and others of the true arthropods. The group is loosely described as being the “missing-link” between worms and arthropods.

Peripatus, or Peripatoides indigo, is widespread throughout the Southern Hemisphere, and New Zealand has several species which occur throughout the country.

These animals are caterpillar-like, approximately cylindrical in form, and not distinctly segmented. 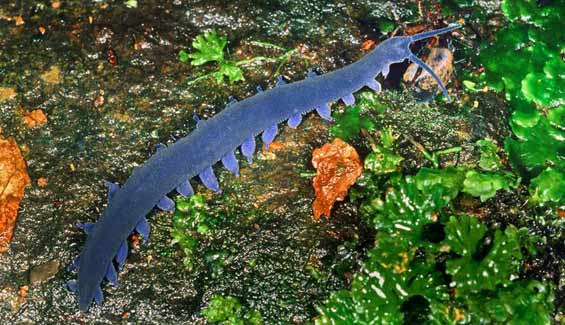 They are velvety bluish-black in colour, have a well-marked head with a pair of antennae and many pairs of short, stumpy legs. They inhabit moist situations and shun light. Common habitats are moss on the forest floor, inside rotten logs, and within the shelter of leaf sheaths.

Peripatus can grow to be up to 60 mm long. They are predatory and emit a sticky fluid to trap their prey.

Did you know? They are also called “velvet worms”.