Take a look under damp overhangs and along stream banks and you may see the night lights, the little glowworm, with its fishing lines out hoping to catch a tasty insect for tea.

The glowworm carefully constructs lines of suspended silk threads and decorates them with droplets of mucus to form sticky beads. The unsuspecting prey is then lured in by the light, and, as it rises upwards, is caught in the drops, and dinner is ready. 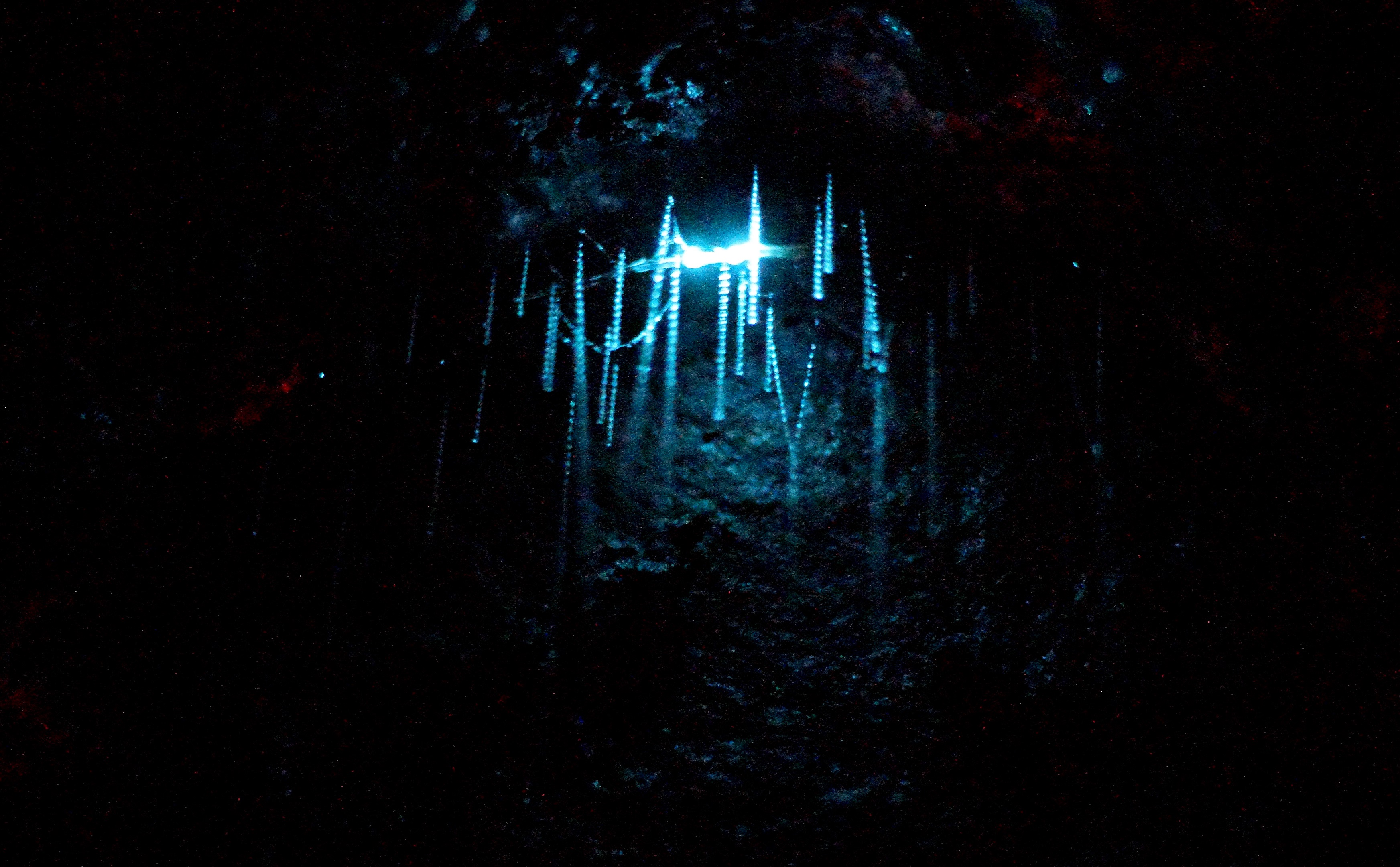 It occurs throughout the country in limestone caves, unused mining tunnels, along stream banks, in damp bush-clad ravines, in damp shady crevices, and under tree-fern fronds in rain forests. The Glow Worm Grotto in Waitomo Cave has become world famous because of the tens of thousands of glow-worm larvae which live on the walls, ceilings, and stalactites of the grotto.

The New Zealand glowworm is one of many creatures that naturally produce light (bioluminescence). The light is the result of a chemical reaction that involves several components that combined form an electronically excited product capable of emitting a blue-green light. The light is used to attract insects, brought into the cave in the rivers, which the glowworm catches and eats. If a glowworm is hungry its light will shine a little brighter and is even more effective. When the female glowworm reaches the adult stage the light is used to attract males for mating.

The New Zealand glowworm is a fly belonging to the gnat family. The larvae, pupae, and adults of both sexes are all luminous. The larva prepares a nest in the form of a tunnel of mucous and silk, and suspends from this an array of fishing lines composed of the same materials. Prey is snared in the long sticky fishing lines. The larva hauls up the fishing line on which the prey is entangled and consumes the trapped insect. Up to 70 lines are let down by one larva and, depending on the size of the larva, the lines vary in length from under 1 cm to 50 cm. Each fishing line consists of a long thread of silk which bears at regular intervals a series of mucous droplets giving the appearance of a string of beads. The droplet size is about 1 mm in diameter. Nests and lines can be reconstructed and repaired. Fully grown larvae measure up to 40 mm in length and adult flies average 15 mm in length. The life cycle appears to take 11-12 months, with the larval stage lasting eight or nine months. Breeding shows little evidence of being a seasonal phenomenon.

Although they are most spectacular in caves, glowworms are also quite common outside; they can be found wherever conditions are damp, food is in good supply and there is an overhanging wall. The scientific name of the New Zealand species is Arachnocampa luminosa. Similar glowworms can be found in the southeast of Australia.

Did you know? The Maori name for glow worms is Titiwai.