The Tui (Prosthemadera novaeseelandiae) is an endemic bird of New Zealand, one of the largest members of the diverse honeyeater family, which means they feed mainly on nectar from flowers of native plants such as kowhai, puriri, rewarewa, kahikatea, pohutukawa, rata and flax. Occasionally they will eat insects too.

Tui are important pollinators of many native trees and will fly large distances, especially during winter for their favourite foods.

The name Tui is from the Maori language name tui and is the formal common name. Note that there is no letter ‘s’ in the Maori language, so the plural is simply ‘Tui.’ The English name, Parson Bird, has fallen into disuse but came about because at first glance the Tui appears completely black except for a small tuft of white feathers at its neck and a small white wing patch, causing it to resemble a parson in religious attire. 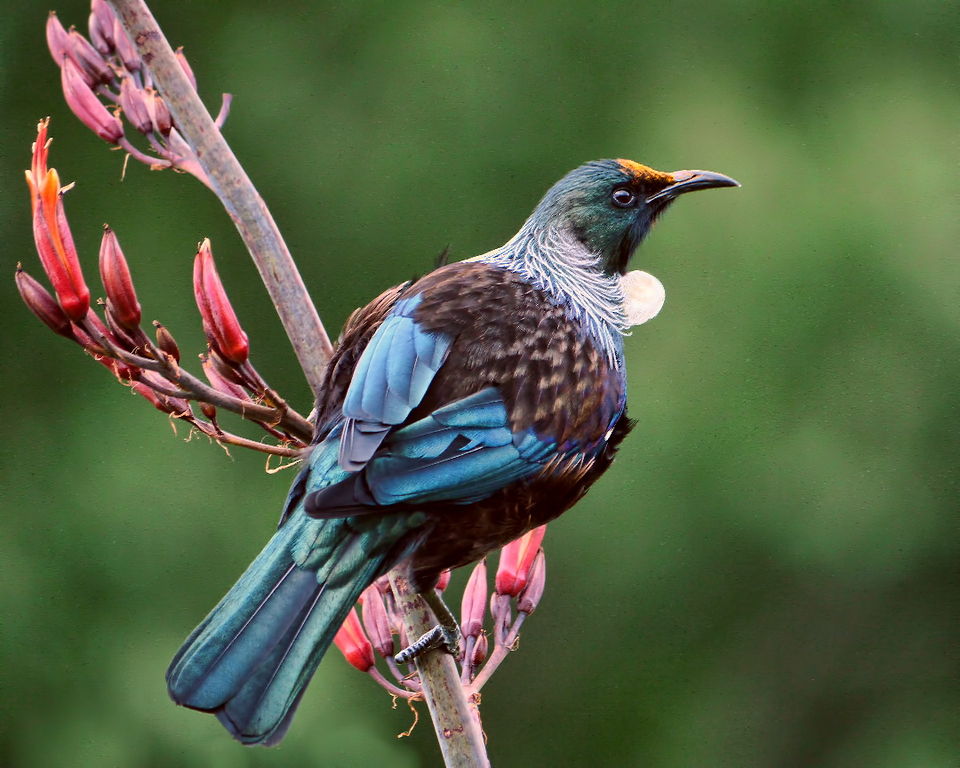 Tui are common throughout New Zealand in forests, towns and on off-shore islands. They are adaptable and are found in native forests, bush reserves and bush remnants, as well as in suburban areas. These attractive birds can often be heard singing their beautiful melodies long before they are spotted. If you are fortunate to glimpse one you will recognise them by their distinctive white tuft under their throat, which contrasts dramatically with the metallic blue-green sheen to their underlying black colour.

Tui live where there is a balance of ground cover, shrubs and trees and are compatible with lizards, butterflies and insects as well as native birds like the bellbird, silvereye and even the kereru. A protective bird, tui have been known to defend themselves against magpies and even mob harriers.

Courting takes place between September and October when they sing high up in the trees in the early morning and late afternoon. Display dives, where the bird will fly up in a sweeping arch and then dive at speed almost vertically, are also associated with breeding. Only females build nests, which are constructed from twigs, fine grasses and moss. The tui has suffered in Puketi Forest with the introduction of predators such as possums, feral cats, rats, stoats, and ferrets, and the destruction of habitat. Effective predator control methods have been put in place resulting in a dramatic increase in tui numbers. A good sign of a successful restoration is the sound of the tui warbling in the forest canopy. The calls of these birds are often confused other birds as they mimic sounds that make up the calls of other birds, such as the bellbird. They combine bell-like notes with harsh clicks, barks and cackles.

Click here to hear the song of the Tui