As you walk through the forest, you might hear a strange rasping sound, that’s the song of the mighty weta. At night weta emerge from their hiding places to feed. They make a peculiar rasping sound by rubbing their hind legs against ridges on the side of their body.

When threatened, weta raises its spine-studded hind legs and makes this rasping sound to frighten off attackers. The two types found in Northland forests are the tree weta and the cave weta.

These wingless orthopteran insects are well represented in New Zealand and are found in the forest and in caves. 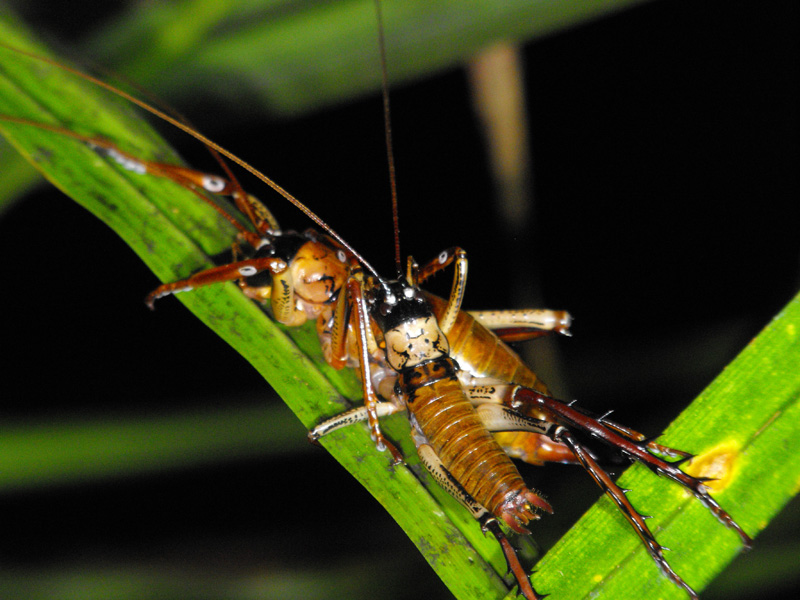 The most common weta is found in rotten logs, in old tree trunks, and under bark. It has a body length of about 5 cm and has much longer antennae. The male is characterised by its large black head. The general colouration of the insect is dark brown. Although it appears to be a fearsome creature, it is harmless but can give a nip with its mandibles if incautiously handled.

Wetas feed on plants and small insects. They have strong jaws and could bite if cornered. Although described as omnivorous, different weta species enjoy different diets. For example, tree weta and giant weta are mostly vegetarian. Ground weta and tusked weta are almost entirely carnivorous, while cave weta are omnivorous scavengers.

Giant wetas are now rare and appear to be restricted to several off-shore islands. They are heavy insects with a body of up to 10 cm in length and with powerful spined hind legs. They are nocturnal and feed on foliage of trees and on grass. Wetas can run very quickly and jump great distances. They are seldom seen in daylight but feed at night, mainly on plants.

Cave wetas are found a short distance inside caves and tunnels. They are small wetas with a body length of up to 30 mm, but they are characterised by extremely long legs and antennae. The length from tip of antennae to the end of hind leg can be up to 40 cm and the antennae may consist of over 500 segments. Cave wetas lay eggs, up to 20 at a time, in soft mud along the walls of the caves. The life cycle is about two years.

Did you know? Weta have been around long enough to see dinosaurs come and go and to evolve into more than 100 different species, all of them endemic to New Zealand. These large, flightless creatures are the gentle giants of the insect world. Only one other insect on Earth is bigger than some species and that is the African goliath beetle.